The building that is now home to Zeandale Community Church was built in 1896 by a Christian Church congregation that had organized in the community a few years earlier.  Area residents donated much of the material and labor for the project. The building site was donated by C. T. Shipps, one of the first  elders of the church.  Shipps owned a general store and was postmaster of Zeandale at the time.   H. C. Marshall contributed sand, while the Lind family and J. H. Akin provided the stone.  Many men helped with hauling the stone to the building site, some bringing up to 60 wagon-loads.  Several stone masons worked on the building, including Fred Earle, Mr. Picolet, Lou Woodman and J. C. Irvin, who was also the minister for the congregation.  Bela Moore, a local carpenter and a charter member of the church, designed the Gothic arch windows.
The first funeral held in the church was for Bertha Hunt, who died May 29, 1897.  A few months later, on 23 Nov 1897, Mrs. Hunt's daughter, Helen "Nellie" Hunt married William Olds in the first wedding ceremony at the church. 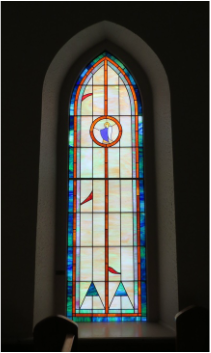 In 1953, the Christian Church Council permitted the congregation to reorganize as a non-denominational church.  Since that time, the church has been known as Zeandale Community Church.
​
The building has also undergone changes over the years.  In 1934, the Ready to Learn Club of Zeandale paid for the addition of a kitchen on the back of the church.  Later this area was used for Sunday School classrooms. The  Fellowship Hall adjoining the church, built on land donated by Sarah Engelbert, was completed in 1963.  It was constructed from stone salvaged from a house in the Blue Valley area and donated by Lester Henton. Beginning in 1977, the stained glass windows were installed.
Sources
Zeandale Kansas 1865-1990
"Want to Increase Building Fund" 30 Mar 1958 Wamego Reporter, p. 7
Kansas County Marriages, 1855-1911 (FamilySearch.org)
Findagrave.com